Reimagining Philanthropy To Build A Culture Of Repair 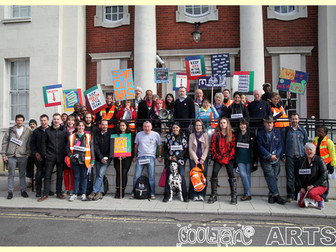 In the wake of the Michael Brown shooting, Black Lives Matter activists called for the creation of a $100 million fund to help communities of color deal with the legacy of slavery and Jim Crow, the New York Times reports.

But some big donors aren't interested in putting their money where their mouth is.

In a series of articles, Nonprofit Quarterly has looked at what it calls a "community-driven philanthropy" that would see some of the world's biggest philanthropists donate their money to communities of color instead of stashing it in endowments.

Instead, the money would be invested in communities of color, with the specific goal of helping them deal with the negative effects of slavery and Jim Crow, including housing discrimination and violence.

"If you want to make reparations, you have to be in the right place at the right time," says the co-founder of Liberation Ventures, one of the biggest donors to the reparations fund.

But Liberation Ventures isn't the only one interested in putting its money where its mouth is.

Others, including the Bill and Melinda Gates Foundation and Google, are also interested in putting their money where their mouths are. Read the Entire Article

Reimagining Philanthropy To Build A Culture Of Repair